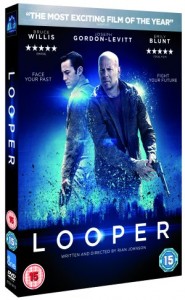 This is a full 4 stars but is not a 5 due to the quagmire trying to explain why you have and don’t have memories of what happens now, but this is Sci-fi, so don’t let that put you off this well acted film especially Pierce Gagnon the young Cid. There is plenty of story and plenty of classic Bruce Willis action. The young Joe is a younger version of Willis played by Joseph Gordon Levitt who spent three hours a day in make up and hours studying Willis to good effect.

This Rian Johnson (The Brothers Bloom 08) film is more of a thinker rather than most of Bruce Willis (Die Hard quadrilogy) films. This is a welcome change as you actually have to watch the film to get the most out of this thrilling experience.
I have to admit that I had to watch it twice to get all the facts straight, but that is the joy of getting the DVD or Blu-ray.
The story, Joseph Gordon Levitt (The Dark Knight Rises) plays Joe a looper, a hired assassin for a criminal organisation based 30 years in the future when time travel has been invented but instantly made illegal so only the biggest organisations can acquire them and then send whom ever they want eliminated are sent back thirty years into the past, where a looper is in waiting to exercise their demise.
There is a proviso to there contract and this a thing called “closing the loop” where the looper terminates their future selves, the bonus to this is that you are free from your contract with a huge payoff but you only have thirty years to live.
this is when Joe comes face to face with the older Joe (Bruce Willis), This is the blink and you miss it part.
It all goes wrong for the younger Joe as he awakes in a field miles from the city and his older version loose “and that is bad very bad for him”. The loop must be closed the “Rainmaker” wills it, he is the mysterious new Holy Terror Boss.
The elder Joe must eliminate this person before they become this infamous Rainmaker, it becomes a race between the two Joe’s to find the young child and this is where Joe younger meets Sara, Emily Blunt (The Adjustment Bureau) the mother of Cid (Pierce Gagnon) Cid is a talented 10 year old but perhaps not in a good way.

Available to buy on DVD, Blu-ray or a SteelBook Blu-ray