“The Path to power is stained with blood” 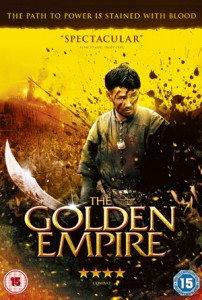 This is a Russian production, directed by Andrei Proshkin and subtitled in English.

The Golden Empire is without a doubt an epic tale, and an ambitious project to undertake. As a newcomer to the Russian film scene, this is certainly an eye opener. The film is set  during the reign of one of the most powerful empires the world has ever seen, the Mongol Horde, and follows the rise and fall of the great Khan.

The tale is set in 1357 and tracks two story lines. One, the seemingly endless and extremely bloody fraternal struggle for the title of Kahn and two, the story of the Metropolitan of Moscow, Saint Aleksei (Maxim Sukhanov), the catholic priest enlisted by Khan Djanivek (Innokenty Dakayarov) to perform a miracle in order to cure the sudden and seemingly supernatural blindness of his mother, the Tatar Queen Taidula (Roza Khairullina).

Representatives from several religions are called upon to complete this task, failure never an option, success not necessarily recognized, punishment always immediate and often fatal.

Be under no illusions, this was a brutal time, and The Golden Empire pulls no punches, the portrayal of the atrocities committed in the dying days of this once great empire is quite often difficult to watch, but that being said, I was literally on the edge of my seat from start to finish and would have fought tooth and nail if necessary to see the outcome of the story.

The Golden Empire is an experience, barbaric, raw, real and very in your face. I thoroughly enjoyed it, but I can’t say I am in a hurry to watch it again. Then again, I wouldn’t have missed it for the world.

If you have real interest in history then I suspect you will find this one well worth a look, terrible yet fascinating, much like the people portrayed; everyone should probably see this at least once.

The Golden Empire is available to buy now on DVD