4 Stars for a great British flick. 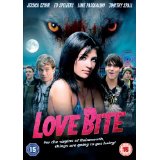 This the story of four lads living in the dead end seaside town of Rainmouth-on-Sea where they try their best to learn how to pull the visiting girls in the arcades and in the local chippy. As per usual, Kev (Luke Pasqualino – Battlestar Galactica, Blood and Chrome) lays out the rules of engagement as if he is an old pro, even though his happy place is working in the local square pie factory.  He deals out his wisdom to Bruno, (Robin Morrissey – Doctors Tv 2012, Will Jackson) whose only ambition is to work on the bin lorry, his faithful sidekick Spike, (Daniel Kendrick – Eastenders Tv 2012, Mat) and our main protagonist Jamie, (Ed Speelers – lonely place to die), the one person Kev thinks may be on par with himself.

Life is humdrum until Jamie meets travel journalist Juliana, (Jessica Szohr – I Don’t Know How She Does It) and falls in love. However, she keeps disappearing and Jamie has to use the internet to keep in touch. This is when the mysterious Sid, (Timothy Spall  – Harry Potter) walks into the dishevelled B and B belonging to his Mother, Natalie, (Kierston Wareing – Fish Tank) where he works as the chef and maid.

This is when people start disappearing on a regular basis and Sid tells Jamie he is a Werewolf hunter and he believes that Juliana is his prey.

This is a major romp around the woods and parks as they frantically try to lose their virginity before the next full Moon to stop them being on the menu.

I found myself laughing out loud as I watched this film.

A great addition to your comedy/horror collection.