This is a really enjoyable film  and I have given it 4 stars. 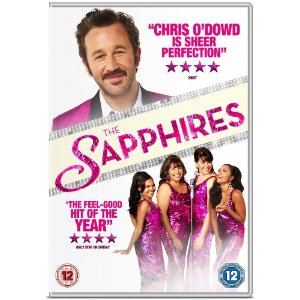 The Sapphires is an Australian film, set in 1968, against the backdrop of the Vietnam war.

The film is based on the stage play of the same name, written by Tony Briggs in 2004 and based on the real life experiences of his mother (Laurel Robinson) and his Aunt (Lois Peeler). He also co-wrote the screenplay with Keith Thompson. It is directed by Wayne Blair.

The Sapphires is a real feel good movie.  Charming (unlike it’s female stars, who are unafraid to speak their minds!) and full of humour. The film tells the story of four talented young aboriginal singers in a small town in Australia in 1968. Subjected to prejudice and humiliation on a daily basis because of their colour, the sisters meet a burned out talent scout (Chris O’Dowd – The Boat That Rocked, The IT Crowd) and decide to change their lives by auditioning to entertain the US troops in Vietnam.

What follows is a heart warming, amusing and touching tale of four young girls as they begin to grow up and learn about life and love among the troops in a war zone.

As might be expected, the music is brilliant, with amazing performances from the four female leads, Deborah Mailman (The Secret Life of Us, Rabbit Proof Fence), Jessica Mauboy (Runner up, 2004 Australian Idol), Shari Sebbons (Redfern Now, Violet) and Miranda Tapsell (Redfern Now, Mabo). The great harmonies and chemistry will have you tapping your foot and singing along in no time.

All in all, most entertaining and a fun way to spend an evening, well worth a watch or two!

The Sapphires will be available to buy on DVD from March 4, 2013.

This website uses cookies to improve your experience. We'll assume you're ok with this, but you can opt-out if you wish. Accept Read More
Necessary Always Enabled